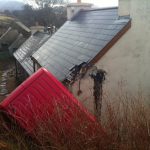 A Donegal County Council engineer is to assess a house near Gortahork which was struck by a van at the weekend in the second such incident in less than three years.

Joanne and Milo Butler were unloading shopping at the house at Cashel na gCor on Saturday evening when a van came off the road and hit the side wall of the building.

The driver was brought to hospital with suspected broken bones, the family was not injured. 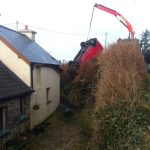 They're now calling on Donegal County Council to provide a crash barrier, which is estimated to cost around 5,000 euro, but the council has indicated in does not normally provide barriers in such locations.

However, Cllr Michael Colm Mc Giolla Easpaig says an exception should be made in this case.........