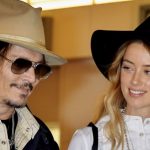 ohnny Depp and Amber Heard have married in a private ceremony on his private island.

The couple, who met on the set of their 2011 film The Rum Diary and revealed their engagement in 2014, celebrated their nuptials on Little Hall’s Pond Cay in the Bahamas with a “wedding weekend” after tying the knot in a civil ceremony on February 3, reported People.
The Daily Express reported that Amber, 28, wore a Stella McCartney white dress as she repeated her vows with the 51-year-old Lone Ranger star in front of 50 guests on Amber Beach, named after her following her first visit.

“(It was) moving but only semi-formal”, a guest said, adding: “Amber did her own hair and make-up and Johnny was as laid-back as usual.

“They wanted to do it all again on the beach and then party for the weekend with friends because they love the island and want it to be a continuing part of their lives together.”
Johnny’s Mortdecai co-star Paul Bettany attended the ceremony, as well as Johnny’s two children from his 14-year relationship with Vanessa Paradis, 15-year-old Lily-Rose and Jack, 12.

The island, which the actor bought in 2004, is only accessible by boat or seaplane.

It is the first wedding for Amber, and the second for Johnny, who was previously married to make-up artist Lori Anne Allison from 1983 to 1985.