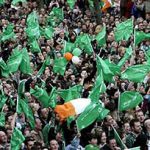 Ireland have gotten off to a winning start in this season's Six Nations.

Second half tries from Conor Murray and Tommy O'Donnell helped Ireland to a comfortable 26-3 win away to Italy.

16 points came from the boot of Ian Keatley.

There are injury problems for Joe Schmidt, however - Sean O'Brien was a late withdrawal with a hamstring injury in the warm-up.

While Rory Best also took a knock during the game.

In the Women's Six Nations, Italy have opened their campaign 5pts to 30pts defeat to ireland
Larissa muldoon and Nora stapleton from Donegal played a vital role in the Irish win