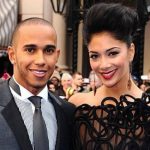 Nicole Scherzinger has dumped Lewis Hamilton after he refused to marry her.

The former Pussycat Doll is said to be "very upset" after ending her seven year relationship with the F1 star following a series of rows over the festive period.

While the couple were believed to be planning to wed last year, it is thought the brunette beauty has grown tired of waiting for her 30-year-old beau to put a ring on her finger.
It is said the pair had been spending less and less time together after Lewis - who bagged his second F1 championship last year - revealed plans to go for a third and Nicole joined the West End production of Cats.

A source explained: "They'd been fighting for months but things had got much worse.

"They spend so much time apart that things just became untenable."

Lewis also confessed that he was feeling pressure from the 36-year-old singer's family to pop the question but insisted the pair were too busy to tie the knot when he was questioned over their relationship back in December.

"But Nicole's massively focused on her work the same as I am. We're happy just way we are. [Marriage at] one point...will be for us."

He added that the couple were too "young" to start having kids.
Speaking about the future of his relationship with Nicole, he said: "She's amazing with kids, I think we're both pretty good with kids ... but we don't have time for that at the moment.

"There are so many things we want to do, but the great thing is that we support each other with it. All in good time. She's still massively young and I'm still young man!"