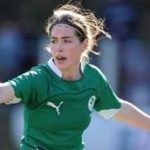 Muldoon who will earn her 24th cap is named at scrum half and will be partnered at half-back with Stapleton who wears the green for a 28th time.

Ireland Coach Tom Tierney has included just one uncapped player in the starting 15 for their meeting in Florence.

Leinster's Hannah Tyrrell will make her debut on the wing.

There's 5 uncapped players on an a largely inexperienced bench.

Tierney said: "There is a natural changeover with the number of players retiring after last season, but there is a core group of senior players that are very experienced and talented. We also have a number of younger players who are very talented and have a lot of promise so it's a good mix.

"It's going to be a very tough game over in Italy. We are under no illusions, but we are going over there very confident that we will be competitive."