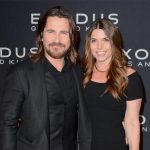 The 41-year-old actor doesn't think he would make a very good director because he isn't passionate enough about film as a genre, and says his current career is interesting to him because he is fascinated by people.

Bale - who is married to Sibi Blazic - said: ''I have to confess, I don't really like films enough to be a director. I like people. I like to study people and that's what I like with acting.

''And for me, I really, really love studying people, so I think it's alright that I'm an actor. But I don't think I'm the right person for a director.''

Bale is known for being a serious person but admits that in his latest movie 'Exodus: Gods and Kings' - in which he plays Old Testament Biblical figure Moses, who led the Jewish slaves out of Egypt - he did all he could to make co-star Aaron Paul laugh so his fake facial hair fell off.

Speaking in the new issue of Loaded magazine, he said: ''I said no glue on the face because it makes it so you can't move. Aaron had a glue moustache and beard and I would purposefully make him laugh and the moustache would pop off.''