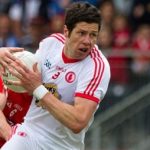 It's been revealed that Tyrone's Sean Cavanagh played more than three-quarters of their Division One defeat to Monaghan on Saturday night concussed.

The Moy clubman suffered a blow to the head fifteen minutes into the game at Healy Park, but refused to leave the pitch.

GAA medical guidelines state that players suspected of suffering concussion should be removed from the pitch immediately, and barred for playing for the rest of that day.

Tyrone manager Mickey Harte claimed the concussion "wasn't serious enough" to cause Cavanagh to be substituted.