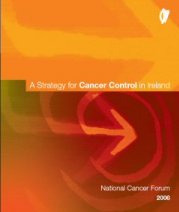 The Health Minister will today announce a new national cancer strategy to be rolled out across the country.

It's 9 years since the last one was unveiled, and a report on its progress will be launched this morning.

A working group will be set up to draw up a blueprint for the new version.

The last strategy proved controversial as it contained no provision for radiotherapy services in the North West. Neither did it set up any centres of excellence north of the Galway Dublin line, allowing instead for Letterkenny General Hospital to become a satellite of University Hospital Galway.