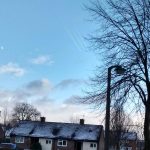 It has emerged that the three jets spotted flying in formation over Donegal on Friday afternoon were US military.

Witnesses contacted Highland Radio News to report the sighting with speculation across social media as to whether or not it was another incident involving the Russian military.

Now the National Air Traffic Services in the UK  has confirmed that the planes were US military aircraft.

A NATS spokesman said: “The information we have is that these were US military had come across the North Atlantic.”