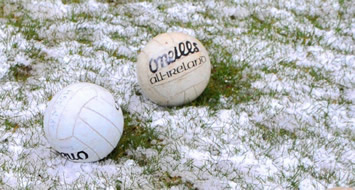 IT Sligo pulled off a big result on Wednesday night dumping Queens out of the Sigerson Cup 1-9 to 0-8.

It took extra time in very difficult snowy conditions for Martin McHugh's chargers to dispose of the Belfast students at the Dub.

Evan Regan scored 1-4 and his goal put IT Sligo into the lead early on.

Queens were back level at half time and then again at the final whistle to force extra time.

Queens missed a penalty in the first period of added time and after that Sligo took control and scored four unanswered points to win.

They'll now meet UCC in the next round.

Mark McHugh was happy to get through the game and get the win....