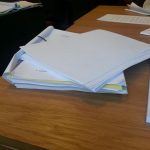 It has been revealed for every meeting of Donegal County Council 500 euro is spent on paper.

This despite 15 thousand euro being spent on tablets for councillors at the start of the current council's term.

The council has expressed its intention to move to paperless meetings but no timeframe for that move has been announced.

The figures were revealed to Councillor Jimmy Kavanagh - he says the sooner the meetings go totally electronic the better: