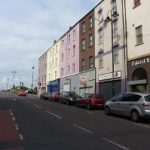 Foyle Road in Derry has now been closed between Craigavon Bridge and the Foyleside Roundabout as part of an ongoing incident which saw John Street closed earlier this afternoon.

Police have issued a statement confirming they are at the scene of an incident at John Street in Derry where we have concerns for the safety of a man.
The alert was raised at about 2.30pm.  Officers have spoken to the man, who is in a block of flats overlooking the street.

The situation at the moment has been contained and police do not believe there is any direct threat to other members of the public.

The bridge remains open, but traffic delays are being reported as tailbacks develop in the area.

May 11, 2021
Planning for an asphalt plant development in Inishowen has been granted. There was some local opposition to the development in Burnfoot. Donegal County Council says in...