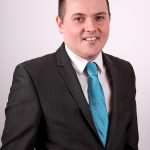 A Donegal County councillor has called for the street lights in Malin Town to be inspected.

It's after a local resident had a lucky escape when a large bulb fell and narrowly missed them.

He says a globe light bulb from one of the street lights came loose, and narrowly missed a woman who had just stepped out of her car as it fell....