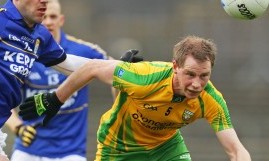 Donegal Manager Rory Gallagher has been given a boost this week with the news that Anthony Thompson will be available for the National Football League campaign.

After Rory Kavanagh's retirement announcement on Thursday the news of Thompsons availabllity will surely come as a relief.

Thompson an All Ireland winner in 2012 is now based in England where he works as an engineer and there had been concern about his plans with the county team.

The Naomh Conaill man will be training in England and will work out playing arrangements on a weekly basis with the Donegal managment.

Donegal start their league campaign against Derry in Ballybofey on Saturday 31st January.