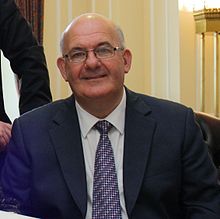 The former Northern Ireland Assembly speaker, William Hay, has said he did not quit Stormont over allegations about his expenses.

Mr Hay, who has previously served as a Derry City Councillor and a Foyle MLA stepping down for health reasons, and is adamant that is the only reason he did so.

The longstanding DUP suspended a member of his staff after the discovery of an irregularity in his office allowances, and his departure from office coincided with allegations made in a BBC Spotlight programme about his expenses and an oil bill.

Speaking to BBC Radio Foyle, Mr Hay said he contacted the police to report the discovery of possible fraud in his Foyle constituency office. He said "There's an ongoing police investigation but I made the first move here and I have no regrets on that whatsoever, absolutely none."

Asked if his conscience was clear Mr Hay said it was.

He says he neglected his health, and began experiencing chest pains. He described it as "the kind of scare you don't ignore".