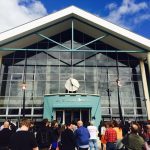 An Grianan Theatre is to close for four weeks in April for roof repairs to take place.

The building will be closed to the public for the first four weeks in April, reopening on Wednesday 29th April.
In a statement, theatre management says that while the works have been planned for some time, the important thing has been to find a time which would minimise disruption to theatregoers, visiting companies and staff.

The leak developed over two years ago, and after investigations, the tender was advertised last August.

Marketting manager Daithi Ramsey says April was identified as the best time to do the work.......