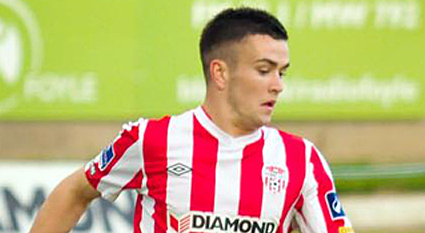 20 year old Duffy is in Spain training with the Celtic first team after impressing during two recent trails where he scored two goals in a friendly with Newcastle.

Derry City Manager Peter Hutton is expecting Celtic senior figures to discuss a move for the £300,000 rated Northern Ireland u21 International when they return.

Meanwhile Patrick Mc Eleney continues to impress at Brentford who are 5th in the English Championship.

Having also been on trail he is now training with the first team at Griffin Park.