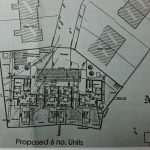 A Donegal councillor has called on the authority to abandon plans to build six social housing units in Letterkenny.

In March last year the council was awarded €1.4m to develop the units in the Glendale Drive area.

Plans are in place to build the units in the open space area there.

But Cllr Ciaran Brogan said residents are strongly against the development, and the council must now abandon them...