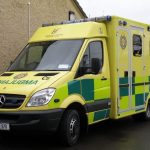 A confidential report into the ambulance service says targets for response times can't be met. A number of incidents in Donegal have been cited in the course of an ongoing debate about delays in ambulances arriving, one of which was highlighted in a recent report which outlined severe problems.

According to The Irish Times, the document says Ireland is too rural to support a service of the same standard as England.

According to the study by Lightfoot Solutions commissioned by the HSE - Ireland's "high rurality" means the cost of running the service is much higher than its English counterpart - while Irish people are less than half as likely to call an ambulance than people in England.

The report says improvements would only be made by hiring 290 extra staff - at a cost of 15 million euro per year - and even then - it may not provide enough of an improvement in clinical outcomes for patients who aren't time critical.