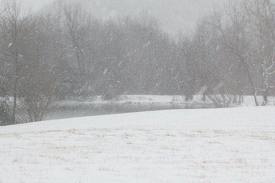 There's a nationwide warning for snow and freezing temperatures over the next 24 hours, with snow lying in Donegal, Derry and Tyrone this morning.

Met Eireann's issued a "status orange" warning for hail, sleet and snow in the west and north-west, with up to 8cm of snow is likely on high ground in Connacht and West Ulster especially.

A yellow alert is in place elsewhere in the country.

All roads in Donegal are in a dangerous condition today, with motorists being urged by gardai to avoid Barnesmore Gap in particular because of accumulations of snow.

May 7, 2021
The Nine Til Noon with Greg Hughes - Weekday's 9am to 12noon Magazine type mid morning chat show providing a forum for listeners to express...