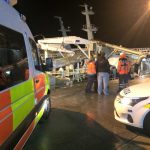 A fisherman has been rescued from the water in Killybegs after falling in at the new pier overnight.

The man was seen falling between from a trawler by a local taxi driver just after 2 o'clock this morning. The coastguard and an ambulance were called immediately.

The callout came just hours after end of the ten day search for Carrick man David Maguire, whose body was found on rocks near Kilcar yesterday afternoon.

Shane Mc Crudden of Killybegs Coastguard was one of those involved in both operations.......