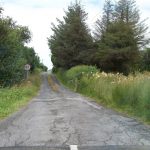 A protest is to take place in Glenties on Sunday fortnight next, January 18th, to highlight the continued closure of the Mullantiboyle Bridge outside the town.

The bridge collapsed four years ago closing what was seen locally as an by-pass around Glenties Town.

There is no money currently available to replace the bridge on the Fintown – Glenties road permanently as the estimated cost of the work would be 600 thousand euro. Money had been allocated previously, but the estimated costs rose substantially as a result of environmental and engineering issues.