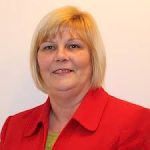 In Derry, Transport NI, formerly the DRD Roads Service, has accepted responsibility for the maintenance of a sea wall in Culmore which has been badly damaged from erosion.

As a result of this, there has been flooding in the area in recent times, particularly in places where the wall has been broken away and replaced by railings.

Local councillor Angela Dobbins is a member of the steering group which is overseeing the maintenance of the wall.

She's welcoming the assumption of responsibility by Transport NI, but is warning that until funding is confirmed, there's no guarantee that the work will be done in the coming year: