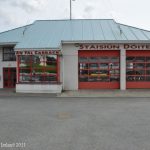 The woman who died in an early morning fire at her home in Ballyboes, Creeslough has been named as Josephine Higgs, who was in her mid 7os.

It's been confirmed that her son entered the house and got her out, but she did not recover and was pronounced dead at the scene.

A post mortem examination has take place at Letterkenny General Hospital, and a garda investigation into the fire is underway.

However, there is no suggestion that the blaze was malicious.