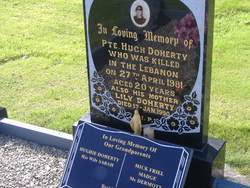 An independent review has been ordered into the death of Letterkenny soldier who was murdered while serving with the UN in Lebanon.

Hugh Doherty, was shot dead during a raid on his post on April 27th 1981. Private Doherty, who had just turned 20, was shot three times in the back.

Kevin Joyce, from the Aran Islands went missing that day and has never been found.

The two men were out on security duty on their own when Hugh Doherty was shot and killed. Private Doherty’s body was discovered at the scene - by a stone wall in a field. Pte Joyce’s body was never recovered.

The ex-High Court judge will examine all the files including those of two inquiries carried out - a UN board of inquiry; and an investigation by the then director of operations for the Defence Forces, which has been criticised by soldiers serving with the two men at the time.

He is expected to report on any inadequacies he finds in the investigations.

His remit includes interviewing any person relevant to the case. Among those he is expected to call for interview are a number of then Defence Forces personnel, who also shared the same accommodation as the two soldiers while in Lebanon.

Mr Justice Murphy will report back to the Minister by April 30th 2015.

Pte Doherty’s family and a number of soldiers who served with him have campaigned for an independent inquiry into the circumstances of the killings for years.