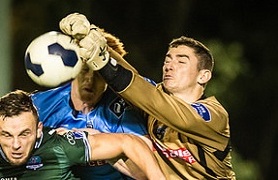 The goalkeeper, who turns 21 in January, departed Ipswich in 2012 and played for UCD’s Under-19 team while completing his Leaving Certificate.

O’Donnell, a former Republic of Ireland underage international, had been at Buncrana Hearts before moving to Ipswich – then managed by Roy Keane – on a two-year contract in April 2010.