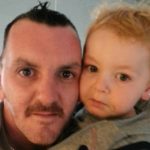 The brother of a Derry man who went missing in Liverpool believes he may try to make his way home.

Michael Curran was being treated at a brain injury unit on Merseyside - he was last seen there on Tuesday past at about 2pm.

His brother Declan spoke earlier on the Shaun Doherty Show - he is asking people in Derry City to keep an eye out for Michael: