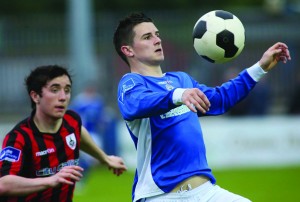 Finn Harps have announced that defender Ciaran Coll has committed to the club for the 2015 season.

The talented left back made his first team debut in 2009 against Kildare County aged just 17 and has since become a mainstay of the Harps squad clocking up a total of 141 senior appearances.

The St Johnston native is approaching his 7th year at the club and Ciaran is looking forward to the season ahead. “I am delighted to have committed to Finn Harps for another year as I think next season could be an exciting time for the club. I think it’s well known that I come from a family of Finn Harps supporters so it’s incredible to think I will be approaching my seventh campaign. I am already focused on getting down to hard work and getting a good pre-season under my belt. My aim is to have my best season to date.”

Finn Harps manager Ollie Horgan commented “Ciarán is a natural footballer who can combine defensive duties with an attacking threat from wide positions. Next year is a big year for both Ciaran and the present squad so with a lot of hard work he has got the ability to help us progress.”