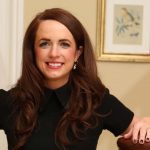 More than €71,000 worth of goods was snatched from her Cara pharmacy in Bundoran, Co,. Donegal, in the early hours of Monday morning.

South Donegal Garda chief, Supt Andrew Archbold issued an appeal for anybody in the area of the pharmacy, either on Bundoran's Main Street, or in the retail park at the rear of the premises, between 10 pm on Sunday and 6 a.m. on Monday to contact gardai.

He said they are seeking information on any activity in that area, and also information if anybody is aware of perfumes being offered for sale."

He described the haul as a well-planed operation and said "a substantial" quantity of perfume was taken.

37-year-old Ramona, a star of Dragon's Den on RTE, runs a chain of Cara pharmacies along with her husband Canice in a €25 million business in the north-west.

Supt Archbold said CCTV footage was being examined and gardai were conducting house-to-house inquiries for the second day in their search for clues.

Gardai have asked anybody with information on the break-in at Cara pharmacy burglary to contact them at Ballyshannon Garda station 0719858530 or on the confidential line at 1800 666 111.