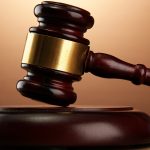 Two Romanians who claimed they came to Donegal to play music, went on a stealing spree instead, a court heard.

And in jailing Lucian Scarlat and Petra Descalu, of 71 Cabra Road Dublin for eight months each, Judge Kevin Kilrane said they had come to Donegal to rob and thieve up and down the county.

The court heard the two men were part of a three -man gang who carried out robberies in Bundoran, Donegal Town, Glenties, Letterkenny and Dunfanaghy in a period from during November 5 and 6th.

The men were charged with theft, handling stolen property and having articles likely to be used in connection with the commission of a crime.

The judge said they had engaged in a nasty series of thefts and he said “it does not get no lower than stealing from a Special Olympics bucket” from McGettigans butcher shop in Donegal Town.

The Romanians admitted stealing various toiletries from the towns mentioned but Detective Garda Paul McHugh told the court that much of the property had been recovered.

He said the two Romanians had travelled with another individual who was not before the court on their crime spree.

They were stopped while driving near Donegal Town on November 5.

The total amount stolen in cash came to E1,100

Judge Kevin Kilrane said that a Probation Report was not applicable in this case.