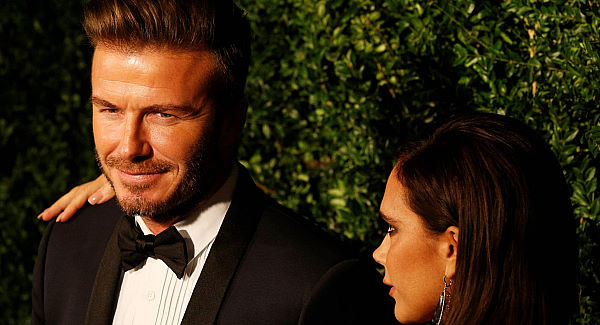 David Beckham is "lucky to be alive" after being involved in a car crash.

The retired soccer star was collecting his eldest son Brooklyn, 15, from Arsenal's training ground in London on Saturday when a woman crashed her Mitsubishi into his Audi, and the pair of them are

said to have had a lucky escape.

A witness revealed: "Beckham and Brooklyn are lucky to be alive. Beckham took the hit on the driver's side - it could have been a completely different story."

The 39-year-old hunk - who also has sons Romeo, 12, and Cruz, nine, and three-year-old daughter Harper with fashion designer wife Victoria Beckham, 40 - was "massively apologetic" following the collision and is said to have given the female driver his jumper as she and her daughter waited for help.

David - who is reported to have hurt his shoulder in the accident - rushed to comfort the pair, who were later taken to hospital, after checking that Brooklyn was okay.

A source told The Sun newspaper: "Beckham was turning right and mustn't have seen the other car, or realised how fast it was travelling.

"She smacked into the side of him. It's a miracle no one was seriously hurt. Beckham was massively apologetic."

However, the former England captain recovered in time to escort wife Victoria to the Evening Standard Theatre Awards last night.