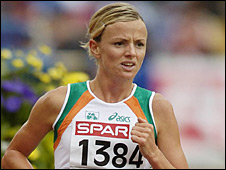 Róisín McGettigan will be presented with a European medal at today's National Athletics Awards in Dublin.

The Wicklow runner who has strong Donegal connections will be given the bronze medal for the 1500-metres at the 2009 European Indoor Championships after the winner of that race, Anna Alminova was banned for a doping offense.

McGettigan has flown to Dublin from her home in the States in order to attend today's ceremony.

European bronze medalist English, is nominated for the Track and Field Athlete award, Boyce is short-listed for the Endurance Athlete honour, Collins and Griffin are among the Junior Athlete nominees.