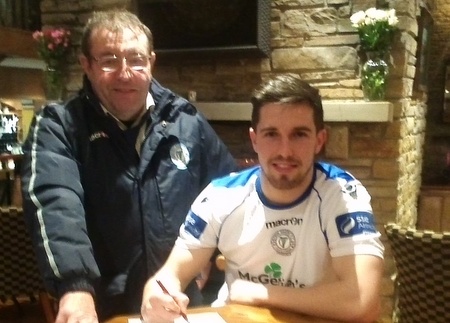 Finn Harps are pleased to announce that Brian McGroary has signed a contract with the club for the 2015 campaign.

The Donegal Town native made his Harps debut in a 1-1 draw with Shelbourne at Tolka Park in July last season and went on to make a total of ten appearances during the second half of last season - six were from starts with four appearances from the bench.  His last three appearances for the club were all in FAI Cup games twice against Avondale and in the Cup semi-final against Pats.

Brian says: “I am delighted to everything sorted as I feel we can build on the work everyone put in last year.  It was important for me to test myself in senior football again and I thoroughly enjoyed it.  I wasn't sure what to expect before I came in but I was very impressed by the professionalism and attention to detail in our preparation so I had no hesitation in committing to Harps for the forthcoming season.