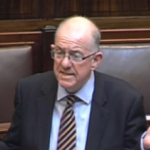 The Foreign Affairs Minister has described the burning of Orange halls in Donegal as an attack on the very fabric of the state.

Charlie Flanagan was speaking after a meeting with Orange Order representatives from Newtowncunningham and Convoy, where local lodges are preparing to rebuild after their halls were badly damaged in arson attacks.

Mr Flanagan repeated his promise that the government would help in the rebuilding process.

He acknowledged at the meeting in Belfast that there have been arrests in respect of the Convoy attack, and urged anyone with any information about the incidents to pass it on to gardai in Letterkenny.