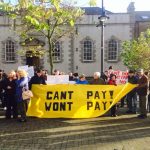 A 24 hour protest is to be held outside Junior Minister Joe Mc Hugh's office in Letterkenny later this week calling on him to join his Fine Gael council colleagues in Donegal in publically calling for an end to water charges and a referendum to ensure Irish Water remains in public ownership.

It follows last week's special council meeting at which all Fine Gael members, with the exception of Cllr Bernard Mc Guinness, supported those calls.

This latest protest, coordinated by Can't Pay, Won't Pay, will begin outside Joe Mc Hugh's office on Friday next at 12 noon.

Cllr Michael Colm Mac Giolla Easbuig says as a Donegal Public Representative, Minister Mc Hugh should be reflecting what his colleagues and constituents are saying...........