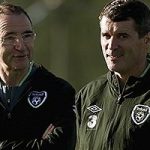 The Republic of Ireland manager Martin O'Neill has called up two uncapped players to train with his squad in advance of Friday's Euro 2016 qualifier against Scotland.

Cyrus Christie of Derby County and David McGoldrick of Ipswich Town have been drafted into the squad.

O'Neill is still waiting to see if James McCarthy will be available after picking up an injury last weekend for Everton.