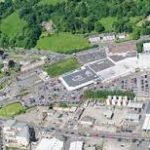 An Bord Pleanala has given the go ahead to controversial plans to allow an exit road from the Letterkenny Shopping Centre onto the Port Road.

The council awarded conditional permission for the road which would allow drivers only turn left – but local businessman Eddie Tobin has objected.

As part of his objection to the council decision, Eddie Tobin of Tobin's Service Station claimed that An Bord Pleanala had already refused permission for an exit road at the shopping centre in 1985, 2007 and in 2009.

In its 2007 ruling refusing permission, An Bord Pleanala said that while the road would be more convenient for some shoppers, it was be at the expense of the general traffic flow in the area.

Mr Tobin argues that the current application offers no information to show the exit road would have any benefit in reducing traffic congestion on the Station Roundabout.

This time An Bord Pleanala did not agree saying a left only exit road would not present a traffic hazard to pedestrians and and would increase traffic flow on the roundabout.

The decision brings to an end an almost 30 year saga over the issues.