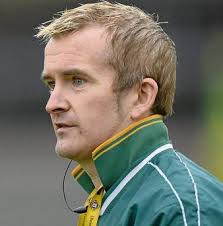 Defending champions Glenswilly are through to the 2014 Donegal Senior Championship Final after a two point win over Noamh Conaill today.

Gary Mc Daid's side produced the game winning scores in injury time to beat their neighbours 0-10 to 0-8 at the O'Donnell Park in Letterkenny.

When Glenswilly were down to fourteen men after Caolan Kelly was sent off for a knee in the back of Stephen Molloy, Noamh Conaill drew level in the 61st with a Dermott Molloy score.

The Glen men responded with two scores in injury time from Oisin Crawford - who came on for the black carded Ciaran Bonner and full back Eamon Ward.

It's a third final in four years for Glenswilly and they will play St Eunan's on Sunday 2nd November in this years county final.

After the game Oisin Kelly got reaction from Glenswilly Manager Gary Mc Daid.