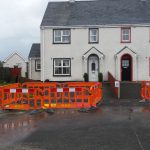 A Donegal Councillor has described the actions of Irish Water engineers in the Finn Valley area as 'unacceptable' and 'utterly wrong'.

Contractors are currently installing meters in housing estates in Ballybofey and Stranorlar.

A number of residents in the Glenpatrick Estate in Ballybofey have claimed that their driveways have been blocked by barriers throughout this week.

Cllr Liam Doherty says he spoke to a number of residents and they were left very annoyed...........