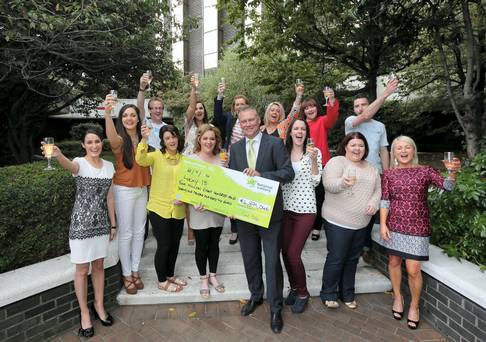 The ticket, which was the sole jackpot winner in last Wednesday night's draw, was bought at Cullens in Cockhill.

The 13 winners are all aged from 20 to 40, and work in the insurance services team at Forward Emphasis, which is based at Malin Head, Co. Donegal.

The group has played Lotto together every week for the last year and the biggest prize they’ve won previous was €150 with 12 people involved. However, when Maria Doherty from Clonmany joined the company last week and was asked to join, she became the 13th member, and in her first Lotto draw she anmd her colleagues will each taking home €374,695.84.

It is the fourth time a Lotto jackpot winning ticket has been sold in Buncrana. Since Lotto began in 1988, over €73.5 million has been paid out to 51 winners in County Donegal.