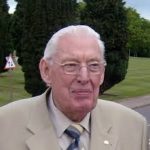 News of the former DUP leader's passing was confirmed by his wife Eileen a short time ago.

Political correspondent Pauric Gallagher has been looking back on his career.....

Politicians North and South have been paying tribute to Dr Paisley - Martin McGuinness said in a Tweet today he had lost a friend.

Very sad to learn that Ian Paisley has died.My deepest sympathy to his wife Eileen & family.Once political opponents - I have lost a friend.