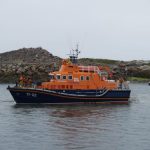 A search took place last night off Bloody Foreland in West Donegal following the sighting of what was thought to be distress flares.

A member of the pubic called emergency services having spotted three ‘flares’ at around 10 o’clock on Wednesday night.

Lifeboats from Aranmmore and Bunbeg were involved in the search, along with the 118 helicopter. The search, which was described as "precautionary" was coordinated by Malin Head Coastguard station, and was stood down at around midnight.

The helicopter was back in Donegal in the early hours of the morning, transporting a patient from Letterkenny General Hospital to Galway.

March 3, 2021
Signage has been erected at a number of illegal dumping hotspots in South Inishowen. There have been numerous incidents of fly tipping in the peninsula...