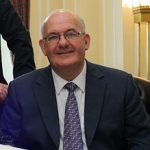 Stormont speaker William Hay has confirmed a member of staff has been suspended pending the outcome of a police investigation into possible fraud at his constituency office in Derry.

He said he began nn investigation he had begun after an irregular trend in payments from his Assembly Office Cost Expenditure was brought to his attention.

The DUP MLA, who is set to leave the assembly for the House of Lords said he had not previously noticed the irregularity. Mr Hay also informed the assembly authorities who have begun their own investigation.

Mr Hay said he has suspended a member of his constituency staff pending the outcome.

Mr Hay told the BBC he takes personal responsibility for the fact that his management of affairs in the office did not uncover what was happening earlier. No one, he said, will be more critical of that than me.