Over 90 cyclists have arrived in Donegal as part of a Malin to Mizen journey in memory of two Gardaí killed in the line of duty here in Co Donegal.

Former colleagues and friends of the late Gardai Robbie McCallion of Letterkenny Garda Station and Garda Gary McLoughlin who was attached to Buncrana Garda Station are participating in the cycle which concludes tomorrow. 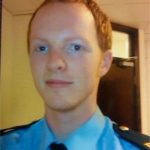 The cyclists left Claremorris this morning, and began arriving in Donegal shortly after 12 noon, with the first of them already in Donegal Town. There are some minor traffic delays being experienced as the group makes its way to Donegal Town, with the last of them expected there between 2.00 and 2.30 this afternoon.

Sergeant Paul Wallace says the final day of the cycle tomorrow will be an emotional one, as the group stops at the sites where both men lost their lives.............