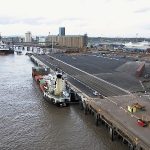 A 47 year old man from Tyrone is due in Basildon court in England later, charged after an Afghan immigrant was found dead in a shipping container in Essex.

The body of Meet Singh Kapoor - aged 40 - was discovered at Tilbury Docks last month, along with 34 others who survived.

Martin McGlinchley, from Coalisland, is accused of conspiring to facilitate illegal entry into the UK - along with two other men from County Derry.