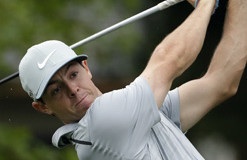 Rory McIlroy's hopes of winning a fourth consecutive tournament appear to be narrow after his third round of 70 left him five shots off the lead at the Barclay's.

He'll tee off his final round just after five today and just after Graeme McDowell who also begins the day on four under par.

Leading the way at Ridgewood on nine under are Jason Day and Jim Furyk who carded repsective third rounds of 68 and 69.