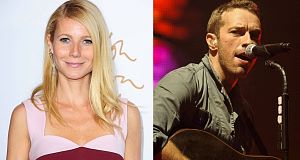 The 'Iron Man 3' star, who recently started dating 'Glee' co-creator Brad Falchuk, has reportedly given her estranged husband, whom she split from in March after 10 years of marriage, her blessing after learning he has moved on with the 24-year-old actress.

A source close to the 41-year-old star told Us Weekly magazine: "Her take is, 'Hey, he could do worse.' She just wants him to be happy."

The Coldplay frontman, 37, who started dating the 'Hunger Games' actress six weeks ago, whisked her away to the Wolffer Estate Vineyard in the Hamptons the weekend before her birthday on August 15.

An eyewitness said the couple enjoyed a low-key date and snuggled up together as they watched the sunset.

The 'Magic' hitmaker's friends are said to be thrilled he has moved on with the "carefree" beauty following his split from Gwyneth, with whom he has daughter, Apple, 10, and son Moses, eight.

An insider said: "She's just a cool girl. She's the anti-Gwyneth. She's not so rigid, and Chris is responding to that. He's enjoying being with someone carefree. He's smiling again. Genuinely."

The duo got together after a chance encounter in London in July, but a source close to the 'Silver Linings Playbook' star said: "Jennifer says it isn't serious, but she's open."