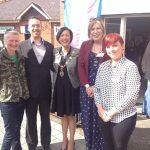 The Centre will be a hub for LGBT organisations, groups and individuals in the North West as well as the centre for delivering The Rainbow Project’s support and development groups, counselling and sexual health testing services.

The Rainbow Project’s Health and Wellbeing Services Manager is Malachai O’Hara. He says
this gives LGBT people a space in the heart of the city that they can truly call their own...........