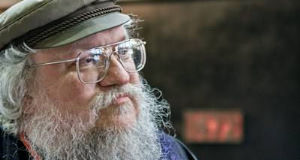 The creator of Game of Thrones has complained he can't go anywhere without being pestered by fans of the TV show and his books.

George RR Martin, 65, says he gets endless requests for selfies, autographs and hints about how the series will end.

Martin's projected seven-book series called A Song of Ice and Fire is a smash hit, and has spawned the globally successful spin-off HBO miniseries Game of Thrones, named after the first of the five books that have so far appeared.

He says demand for the next instalment is so high he sometimes feels he can't go out.

"It does get a little irritating at times," he said.

"It happens when I do anything basically - watching a football game on TV or visiting my family in New Jersey…No matter what I do, there'll be people on social media saying 'He should be at home, writing'."

He said in the Guardian interview: “Oh and selfies! If I could clap my hands and burn out every camera phone in the world, I swear I’d do it!”