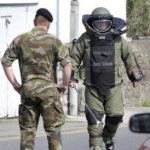 There is security operation ongoing in Downings  following the discovery of a suspect device.

The alarm was raised in Downings in the early hours of this morning after what's thought to be a pipe-bomb type device was found close to a residential property.

The property belongs to a well known family in the business community.

There were reports earlier that a device had been found at a second home belonging to the family in Kilmacrennan, but that cannot be confirmed.

Army bomb disposal experts are attending the scene to determine if it's a viable device and if so, to make it safe.